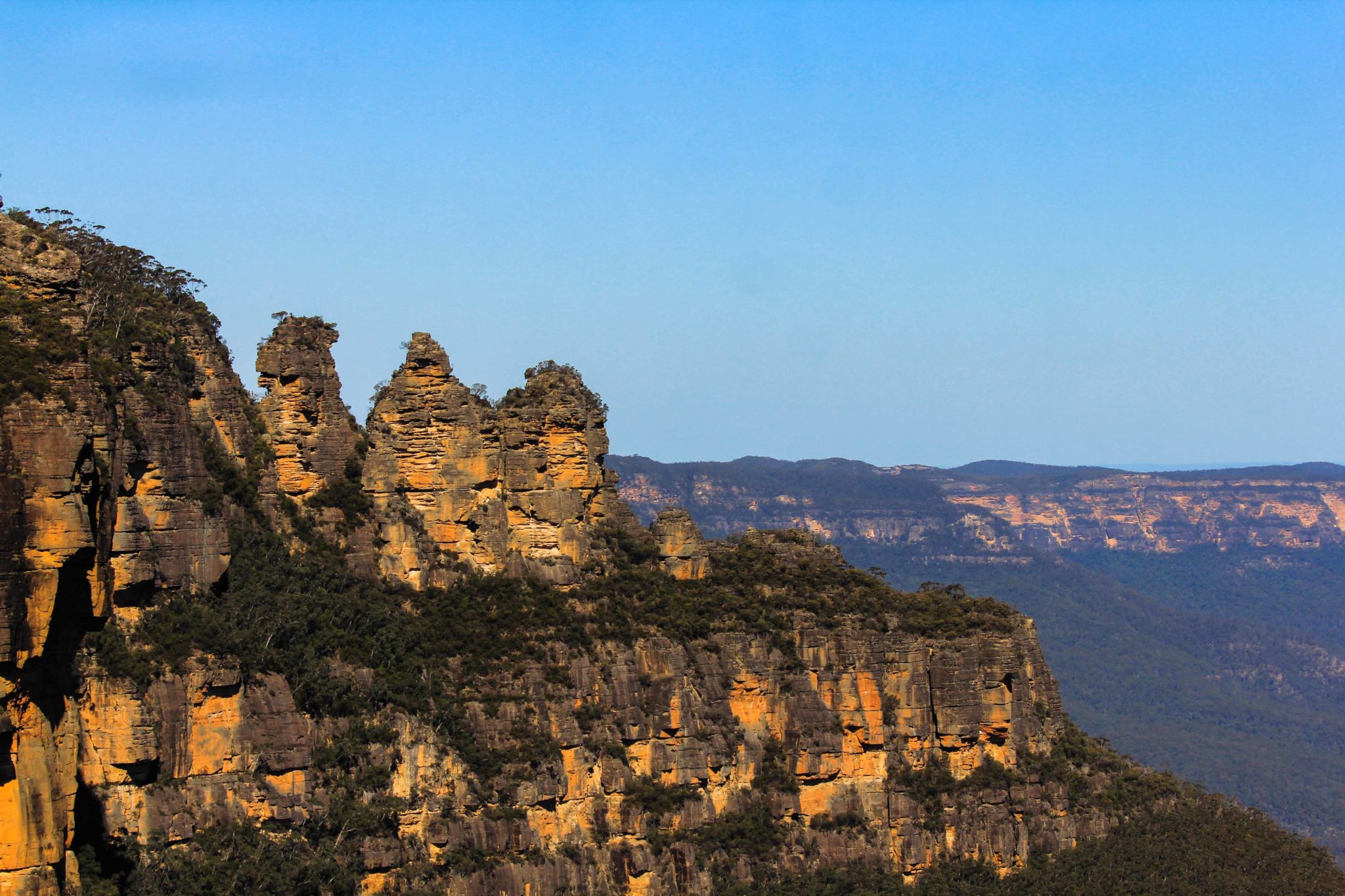 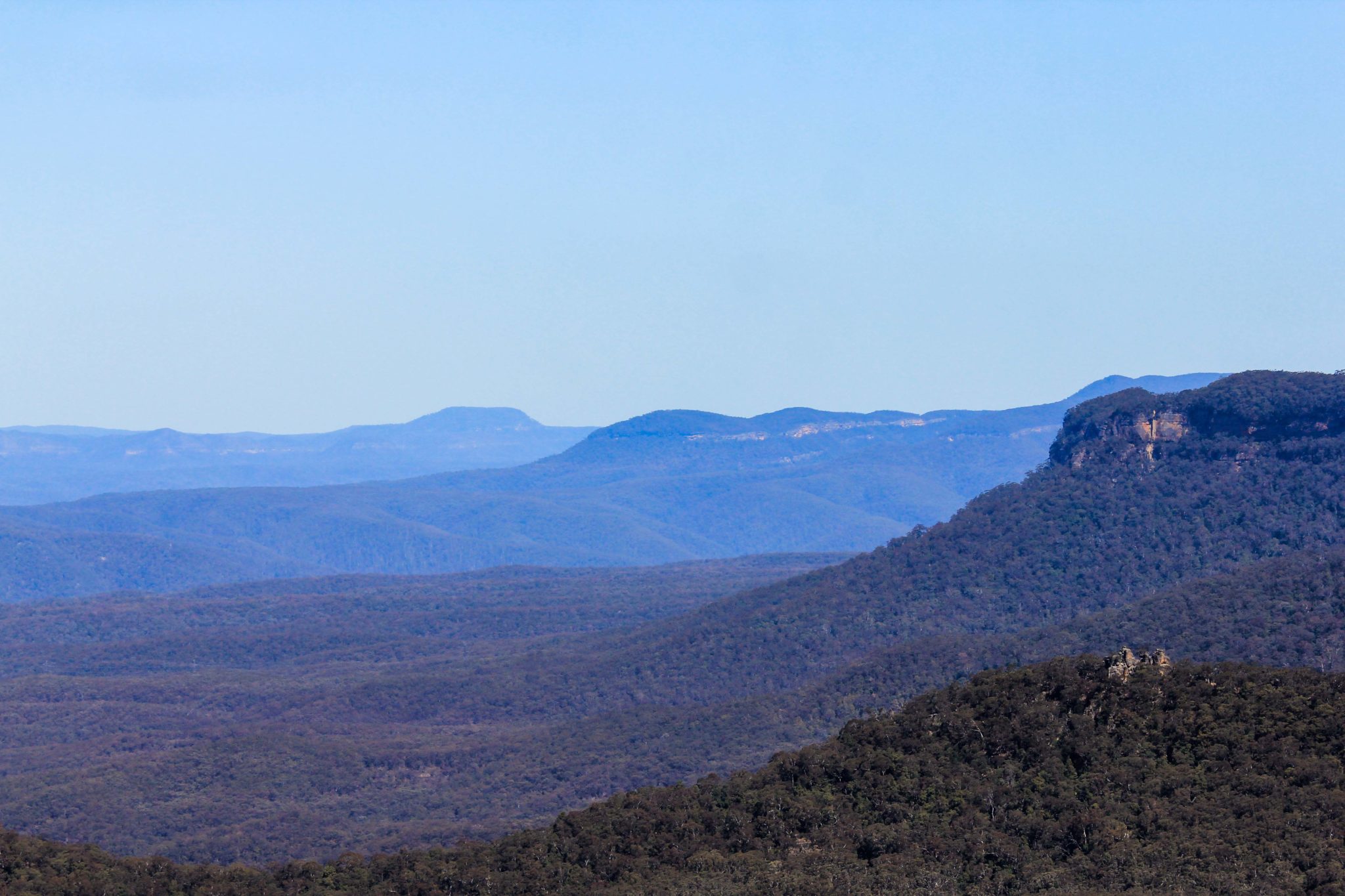 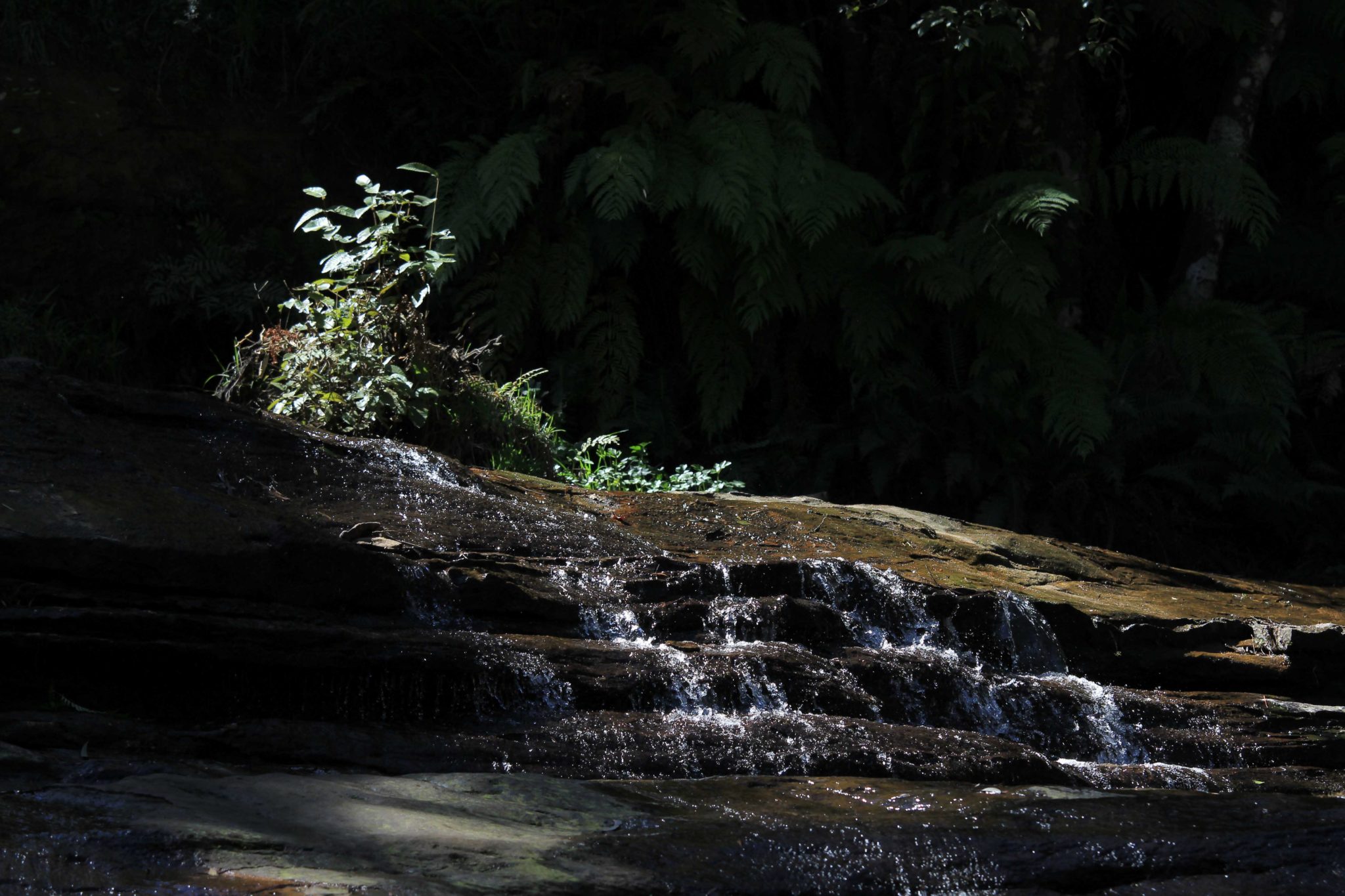 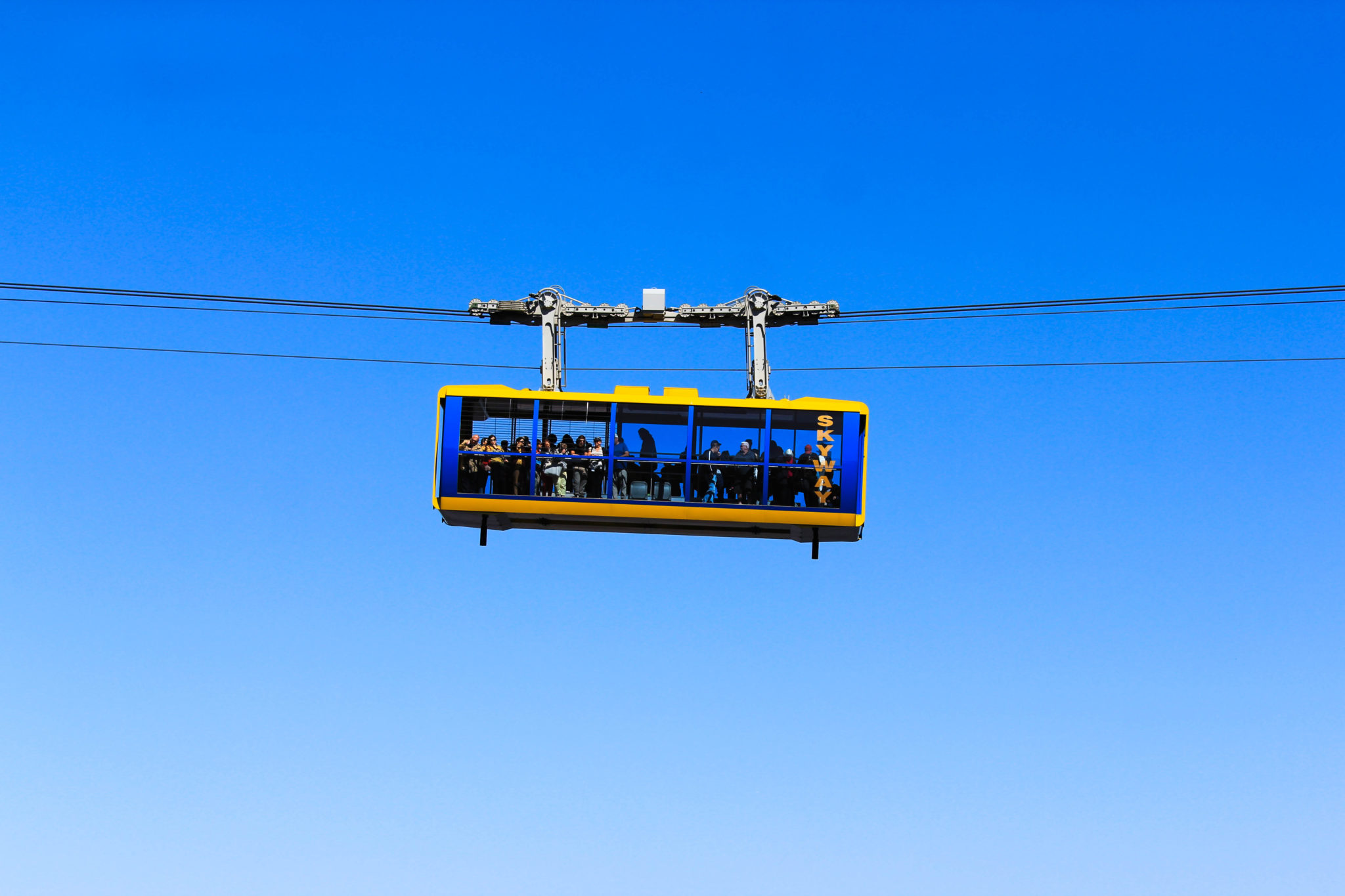 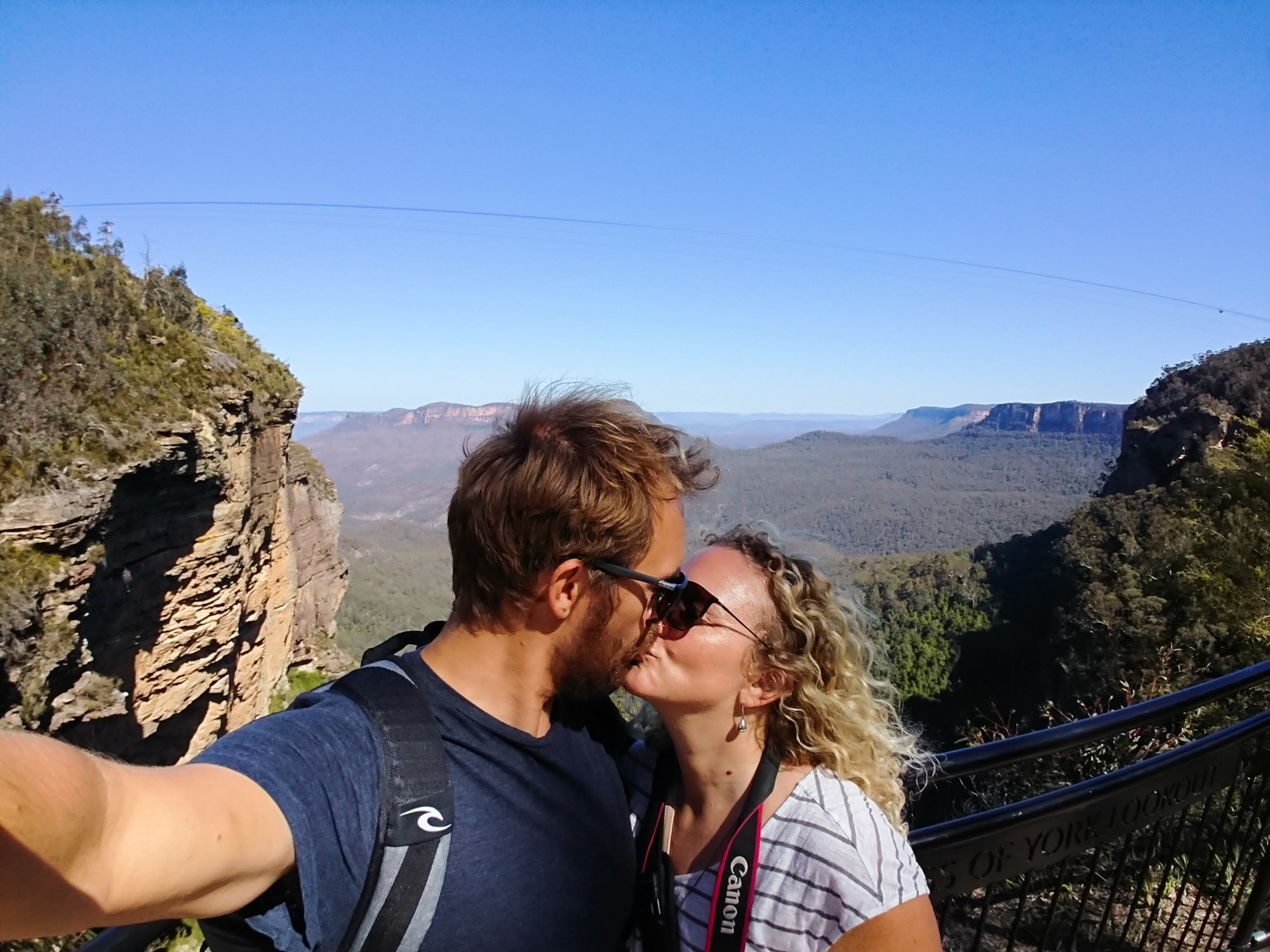 The Blue Mountains is a vast mountainous area about 2 hours west of Sydney. Malin had visited the area before, but as Linus had never been there and dramatic, wild and rugged nature is very much right up our alley we decided to leave the city for a day of exploration.

We caught the Blue Mountains Line from Sydney Central early in the morning and after a nice train ride we arrived in Katoomba, the small town where the Three Sisters, the main tourist attraction in the area, are. The main viewpoint, Echo Point, is about a 30 minute walk from the station and as we had spent the last couple of hours sitting on the train we decided to stretch our legs and walk there. We walked through the town centre with lots of cafes and shops and as we left the town behind us we came through a residential area with some pretty houses before we reached the viewpoint.

It is quite breathtaking to look out over the vast area opening up before you with forest clad mountains as far as you can see and the blue haze, that has given the mountains their name, rising from the valleys. The Three Sisters is a rock formation in the shape of 3 spires that stands to the left of the viewpoint. They are very strange looking rocks, and you can easily see why they have become the main attraction. There were quite a few people at the viewpoint already so after a short time taking in the view we decided to try to avoid the crowds and walk towards Katoomba Falls and the Prince Henry Cliff Walk which is in the opposite direction of the Three Sisters, and an area that Malin had not explored on her earlier visits.

The track runs along the cliff and passes through dense woodlands with viewpoints popping up along the way. As we reached the first landing of the Katoomba Falls we sat down and watched the waterfall and the many cockatoos flying among the tree canopies above. It was quite serene to sit there and listen to the flowing water, and the sound of the birds, but after a while, a large group of tourists arrived and we decided it was time for us to continue our walk. The track took us past many beautiful viewpoints where we could look out over the valley and the further we walked the more quiet it got.

As we reached the end of the track we could see another sign pointing towards the Witches Leap and the Furber Steps. After some debating we decided to continue on this next part of the hike as well. The track leads down through the forest and the Witches Leap shows up between the trees quite soon after you start to walk. It is a rock formation with a very clear face sticking out of it. It is quite eerie to see it through the dark dense forest and it is easy to see why this place would be seen as magical.

The Furber Steps continued down the mountain side and as we descended down the steps the thought crossed our minds that for every step down, there would eventually have to be a step up again. As the track took a sharp turn we saw a small sign towards the Katoomba Falls Lookout and after a few minutes and more steps we reached the lookout at the base of the falls. We sat down and had a power bar and some water while watching the vast view of the valley stretching out underneath us and the cockatoos flying across the base of the falls before returning back to the treetops below.

After taking in the view for a while we decided it was time to start our journey back and we were surprised at how easy it was to walk up the stairs again. We came to a t-junction with one track leading back the way we had come and another taking us towards Katoomba, but via a different track. We decided to take the path we had not seen yet and after many more steps and considerably less power in our legs we reached the top of the cliff again and started our walk back to the town centre.

The 3 hour hike had rendered us quite starving, and we sat down at a café to devour some really delicious baked potatoes before we went back to the station to catch our train to Sydney after an awesome day in the wild.