Wild life camping and a thief 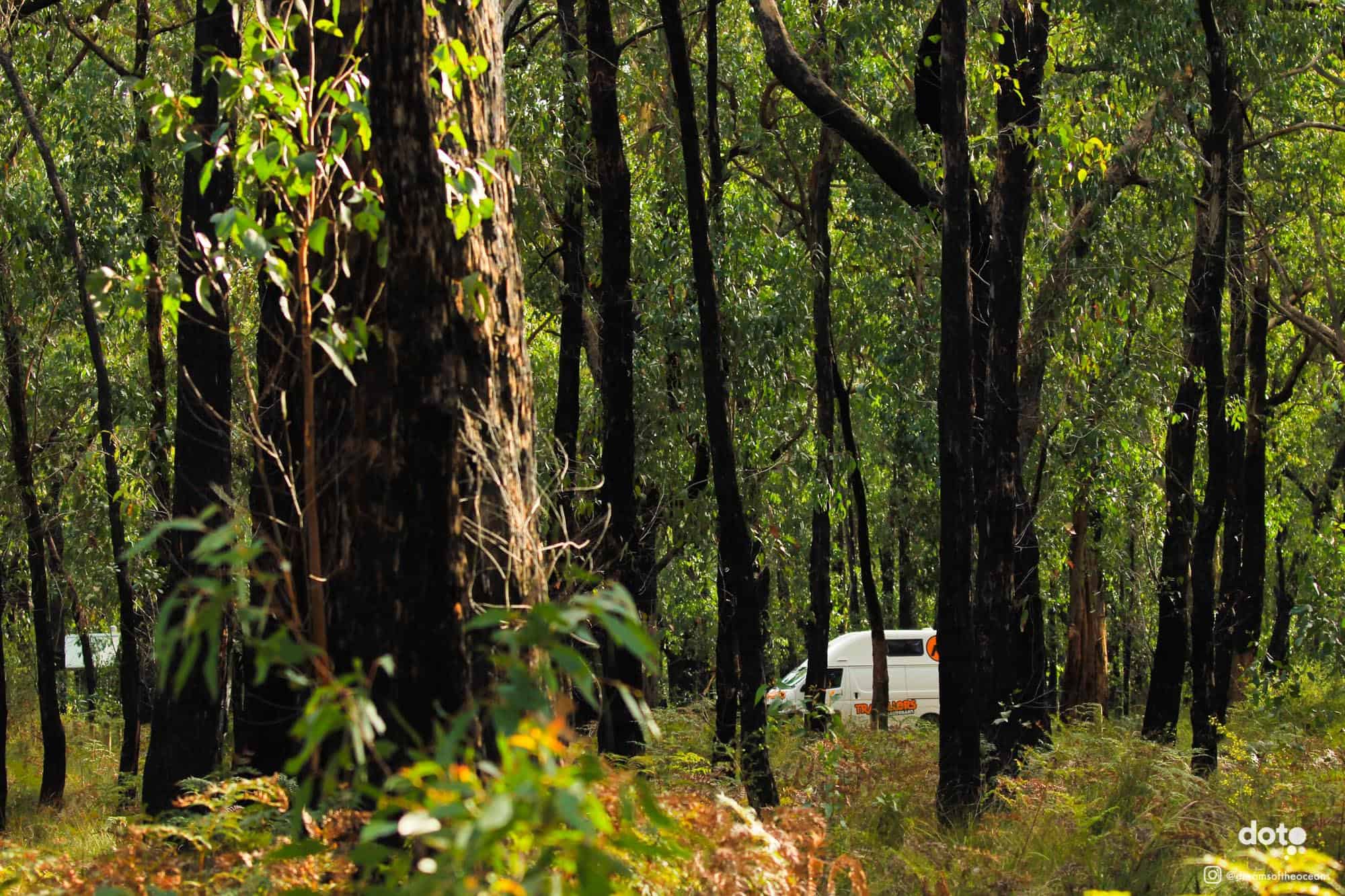 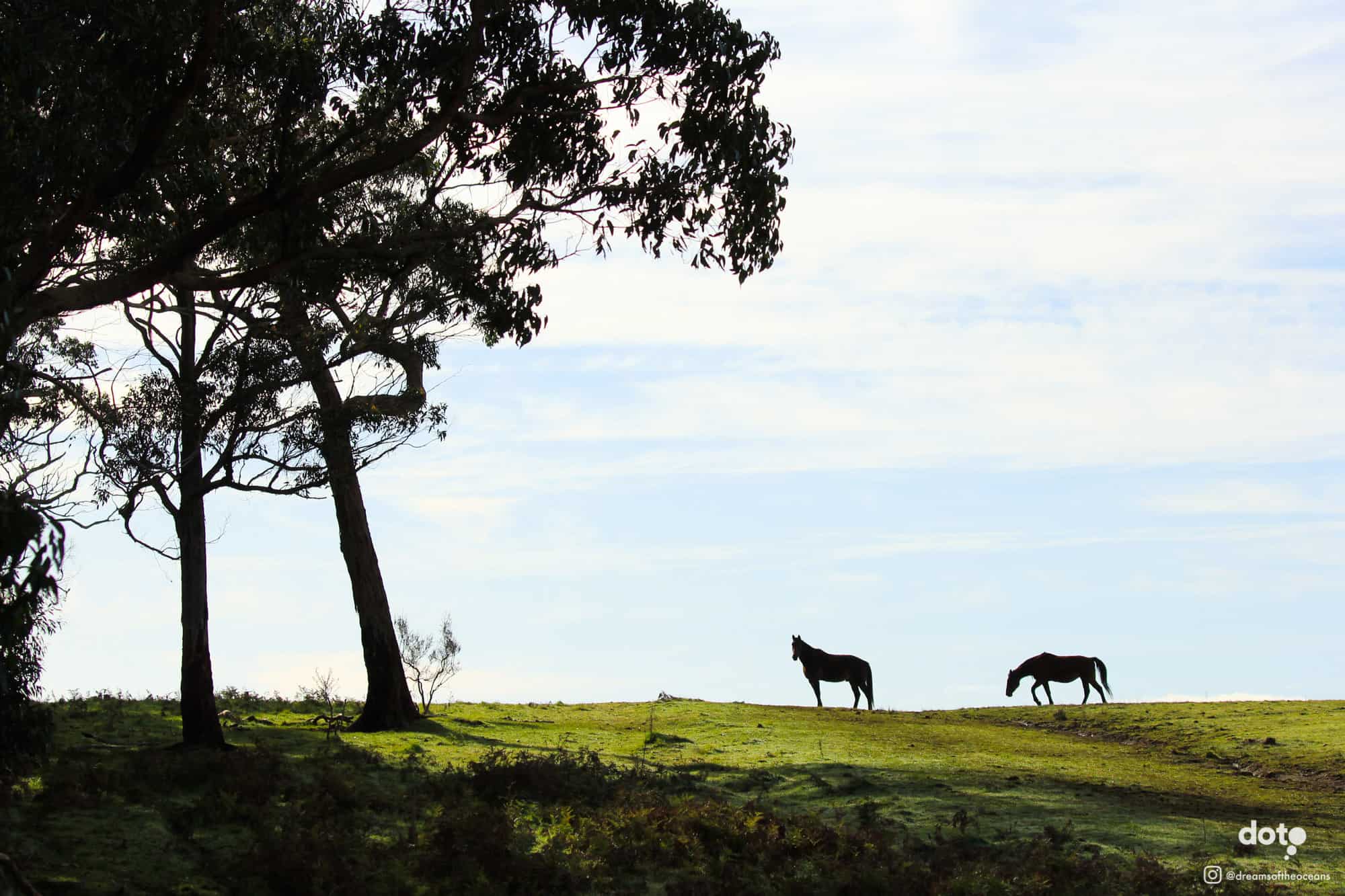 Our friendly local at the camp site had pointed us in the direction of the coast for our next leg of the trip. As it was already pretty late in the afternoon the one hour drive was perfect to have time to get some supplies in the town of Portland before deciding to do some free camping in a wondrous place called Saw Pit camp site, just 10-15 minutes outside town.

We had our little WikiCamps app to help us find some of these little gems and this was a beauty of a camp site. Driving inland for a short bit we turned up towards a dense forest covered hill. Right as we were going to turn in to the site there was a group of wallabies nibbling at nuts or something at the side of the road. The little road leading in to the site was just a packed mud track and the area itself was snuggled right into the woods. We parked so we didn’t have too far to walk to the rest rooms at night and were glad to find that there was a fire pit near our car. What made us even happier was that there were some small smoldering embers in it. We hadn’t even planed to make a camp fire that night but as this chance presented itself Linus quickly went out in search of some twigs, branches and sticks to get the fire going again.

It was some hassle and careful blowing before the wood finally caught fire and success, our first little camp fire was up and running! Now we needed to get more wood to have enough to cook our hamburger dinner, and as Linus went out hunting for more wood. We noticed two other campers also on the prowl for timber and it became a race to get to the good pieces. Linus finally gave up and went straight into the woods and it dawned on him that he was walking in the forest in Australia, at night, and was very likely surrounded by 48 potentially lethal animals, but hey, we wanted to cook hamburgers and that wood wasn’t going to collect itself. The noise the parrots made as the sun was setting was truly spectacular though and it echoed out in the forest as night arrived.

Our fire crackled, our burgers sizzled and we sat watching the sky through the massive tree canopies above us and it was breathtaking. As we were just starting to dig into our hamburgers Malin heard something, then she saw something, something rather big, over by the bench to the side of us just where we had our avocado creme and delicious brie cheese. Linus thought she was exaggerating but then he also saw it, a fluffy and rather cute brush-tailed possum at the size of a small dog. Ah dang it, we thought it had gotten to our cheese! But to our delight it went for the avocado creme, and as we tried to shoo it away from our food it looked up at us and slowly, slowly walked in to the woods and even stopped to look back as if to make sure that we hadn’t changed our mind about the free treats. It appears we need to work on our possum shooing a bit.

We rose early with the morning sun to enjoy the display of light coming through the trees. We made some coffee to go and headed out for a little look around the woods around us. The forest was waking up with a beautiful cacophony of chirping and squawking and after a short walk the trees gave way to a magnificent panorama view of vast farms and fields that stretched all the way down to the ocean. A skip and a jump to the left of us we spotted a mob of kangaroos chewing on some breakfast grass together with a couple of horses. Australia is awesome, haha. Standing near the fence attracted the horses and they stopped by to say g’day and got a pat on the nose.

We had decided to treat ourselves to a café breakfast after our morning stroll, and the nearby town of Portland is famous for its plentiful cafés. We ended up eating at Lido Larder, one of the best coffees of the trip paired with some avocado toast, it was bloody brilliant. The locals were in full swing getting their morning brew and it felt nice to sip some delicious brew while letting our wild life adventure sink in.